…and love where you live

Spirit of place is defined as the tangible (buildings, sites, landscapes, routes, objects) and the intangible elements (memories, narratives, written documents, rituals, festivals, traditional knowledge, values, textures, colors, odors, etc.), that is to say the physical and the spiritual elements that give meaning, value, emotion and mystery to place. Rather than separate spirit from place, the intangible from the tangible, and consider them as opposed to each other, we have investigated the many ways in which the two interact and mutually construct one another. The spirit of place is constructed by various social actors, its architects and managers as well as its users, who all contribute actively and concurrently to giving it meaning. Considered as a relational concept, spirit of place takes on a plural and dynamic character, capable of possessing multiple meanings and singularities, of changing through time, and of belonging to different groups. This more dynamic approach is also better adapted to today’s globalized world, which is characterized by transnational population movements, relocated populations, increased intercultural contacts, pluralistic societies, and multiple attachments to place.

My Paganism is a religion of location.  Modern terminology might call it bioregionalist or topophilic.  More traditional terminology might say that it is based in the idea of “spirit of place” or by the Roman idea of genius loci.  My faith sits at the point where these definitions overlap, not wholly part of any of them, instead, part of all of them. 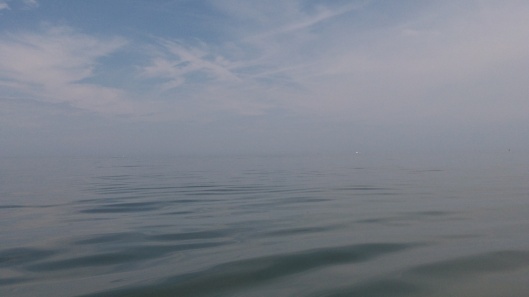 This is where we live.

Our home is about three blocks inland from where the sea meets the sky, but this is where we spend the largest chunk of time outside.

Most mornings, when the tide is low but on its way in, I start my swim here.  Every once in a while, I share my swim with a pod of dolphins cruising along just offshore.  More often, my only company is a couple of crabbing boats or a lonely sailboat out for an early jaunt.

Nearly every day, the kids dig in the sand and play in the waves at the beach that hosts this view.  They know which rocks the big crabs live behind, where to dig for soft shell clams, how to tell a boy crab from a girl, and all of the different kind of shells that hermit crabs make their homes in on our beach.  Chickadee has necklaces of jingle shells and Sharkbait, who can’t otherwise sit still to save his life, can hover motionless behind a ghost crab hole until its resident makes its appearance.

My husband and I held our children’s baby blessings in this place.  We have celebrated a number of holidays, religious and secular, here.  I have come to this spot in anger and frustration as well as joy and elation.  I have cried here, and prayed, and bled as well.

There are a million different ways to live local– farmer’s markets, supporting small businesses, getting to know your neighbors, walking or biking rather than driving, volunteering for local charities, being a tourist in your own community, etc.  Every community is different and every individual’s situation is different, and the ways that we can participate in our local communities meaningfully vary widely.

But to be spiritually meaningful, it starts with really living where you are.  It starts with getting to know the spirit of your place, as a personal relationship with your land-base and your community.  To truly live where you are, you have to learn to love where you live as an active devotion.

***This has been a post for the annual Pagan Values Blogject–this year I’m blogging on my personal values and how they are informed by and in turn inform my spiritual and religious beliefs.  In past years, I’ve blogged on the values that are central to our family (hospitality, service, integrity, and conservation) as well as those that I think are uniquely represented in the wider Pagan umbrella  (respect, plurality, sacredness, and experiental gnosis).  Other posts this year for this year include “my body, my temple”, and “pass it on”***